On Saturday morning, my 13-year-old stepson’s hermit crab, Hercules, went to the great crabitat in the sky.

It was a mournful occasion marked with much wailing and moaning and donning of solemn black attire. But once I got out of bed, removed the crotchless teddy, and took a cold shower, there was the matter of burial to attend to.
Since the kids are with us only part-time and my husband was out of town, the funereal duties fell to me. My day’s to-do list included planting our vegetable garden, so I decided to honor the deceased by allowing him to fertilize a tomato plant.
I dug a hole suitable for both crypt and fledgling tomato and gently shook the lifeless crustacean body from its shell into the grave. The odor suggested Hercules’s demise may have been several days before the discovery of the corpse, but I opted not to amend the certificate of death.
I sang a few hymns, drank a bottle of wine in reverent communion, and planted my budding Oregon Spring tomato atop the sacred burial site. Then I set the empty shell beside the plant to serve as a tombstone until a more suitable one could be hand-carved from a nine-foot slab of Italian marble. 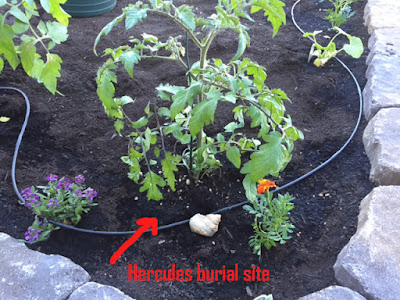 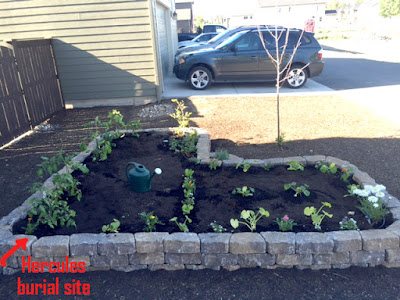 Once I finished up the garden, I went inside and spent the evening hosting a wake with the surviving hermit crab, five cats, the dog, and a black ghost knifefish the kids dubbed Jack Black. In the morning, I went outside to check the garden and discovered to my absolute amazement that Hercules’s shell had moved ten feet to the opposite side of the garden. 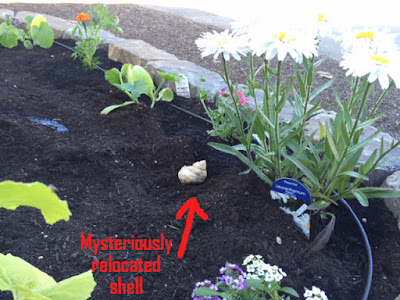 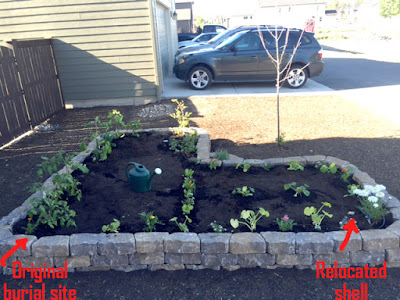 Mystified, I picked up the shell and double-checked to be certain I hadn’t mistakenly left a living creature inside.
I kid. That’s what a sane person would do. Or maybe the aforementioned sane person might assume a neighborhood cat or raccoon had moved the shell.
I, on the other hand, concluded the ghost of Hercules had decided he preferred to spend his eternal dirt nap beneath a daisy instead of a tomato. I took photos and sent them to my husband with an explanation about the ghost, likely prompting him to question the wisdom of his decision to marry me last fall.
After that, I went about my day like normal, which is to say I spent eight solid hours siting braless and unshowered in front of my laptop writing elaborate blowjob scenes for my next romantic comedy. Around 4:00, I went outside to check the garden again in case six bushels of tomatoes had magically sprouted from the consecrated remains.
That’s when I discovered the shell had moved again. 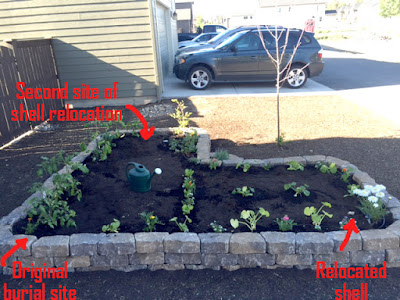 So I’m considering giving up romantic comedy in favor of writing crustacean ghost stories. If anyone needs me, I’ll be at my laptop with a bottle of wine by my side and one eye on the door that leads to the garden.

* This article was originally published here

How to Move Across The Country With Your Pets