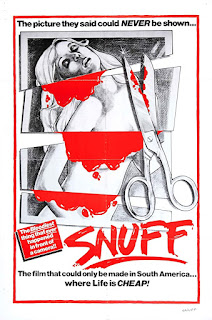 The title alone is enough to grab your attention, which is exactly what New York-based distributor Allan Shackleton had in mind when he released Snuff in 1976. The brainchild of husband / wife team Michael and Roberta Findley, who shot the movie – originally titled Slaughter – in Argentina in 1971, Shackleton purchased its rights, added a scene at the end (which made it appear as if a woman was actually murdered on-screen), and changed the title to Snuff.

Snuff films (for those who don’t know) are a type of underground movie that the FBI and most local authorities classify as “pornographic”, for supposedly depicting actual killings or suicides (though at the time Snuff was released, the FBI insisted there was no hard evidence that these films were anything more than an urban legend). And while Shackleton’s “bonus” scene certainly drummed up its share controversy (most of it generated by the distributor himself), it added nothing to the overall movie. In fact, the finale undermined all of the style and energy that the Findleys managed to squeeze out of what was already a tough, unflinching motion picture.

The story centers on actress Terry London (Mirta Massa), who has flown to Argentina with longtime producer (and boyfriend) Max Marsh (Aldo Mayo) to appear in a movie. While there, Terry rekindles her romance with millionaire playboy Horst Frank (Clao Villanueva), whose father (Alfredo Iglesias) sells arms to Arab militants. Little does Terry know that she’s become the focus of a Manson-like cult, led by Satan (pronounced “Seh-Tahn”, and portrayed by Enrique Larratelli). Arming his bevy of female followers, including Angelica (Margarita Amuchástegui), Ana (Ana Carro), and Susanna (Liliana Fernández Blanco), with knives and sending them out to kill in his name, Satan is convinced that Terry’s and Horst’s unborn child will serve as the supreme sacrifice, the one that will finally transform him into an all-powerful God.

Made for approximately $30,000, Slaughter (aka Snuff) is a disturbing, violent, misogynistic bit of sleaze. When they’re not killing people, Satan’s disciples serve as his private harem, and there are numerous scenes in which he tells one girl to inflict violence on another (a “cleansing” by pain) , orders that are carried out without hesitation. Even Terry, a famous actress, isn’t above the control of the men around her; while talking to reporters, Max Marsh says that if he tells Terry to “stand on her head” for a role, that’s exactly what she’s going to do. In addition to its theme of women being dominated by men, Snuff is quite often shockingly violent (while we never actually see any knives plunge into their victims, the Findleys provide enough blood in the aftermath to make you squirm a little in your seat).

Still, despite the limitations of its budget and the troubling nature of its story, Slaughter has a style that makes it, at the very least, an occasionally engaging exploitation flick, with well-executed hand-held camerawork (a chase towards the start of the film, where several of Satan’s followers are pursuing one of their own, is fairly exciting) and a few dynamic shots of women on motorcycles (the rock music that accompanies these sequences sounds like the first few chords of Steppenwolf’s “Born to Be Wild“, which immediately calls to mind similar moments in Easy Rider).

As for the scene that Shackleton added at the end (made to look as if it was shot on the set of Slaughter), it certainly ups the ante on the movie’s blood and gore, but lacks the energy present in everything that came before it (not to mention the fact that this “real-life killing” features some pretty shoddy, though admittedly graphic, practical effects). Whereas Slaughter was at least watchable, Snuff is a hard one to recommend even to die-hard exploitation fans.
Rating: 5 out of 10 (proceed with caution)