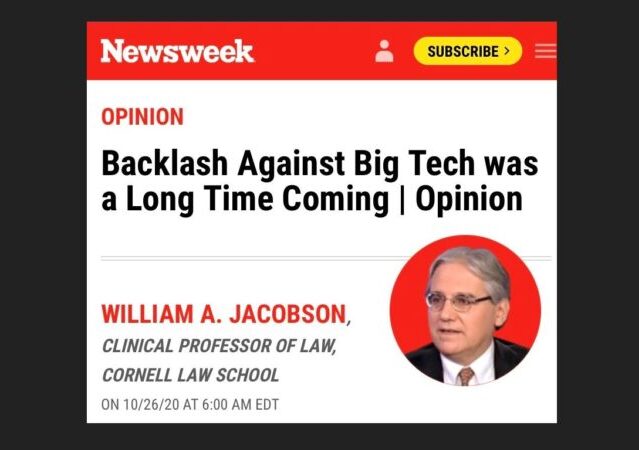 As you know, I have written a lot here about the creeping authoritarianism of big tech, particularly the massive social media platforms that dominate political communications. In my Dreadful 9th Anniversary post in 2017, I wrote of the danger:

If the assault on the Electoral College was the game changer for me, a runner up was waking up to implications of the concentration of power in a small number of social media and internet companies who have been weaponized to shut down speech and expression. Google, Facebook, Twitter and two handfuls of other companies now completely control our ability to communicate with each other, while internet backbone companies are poised to block internet access altogether.

Imagine living in a repressive country in which the government blocked access to and suppressed internet content. You don’t need to move. It’s coming here but from private industry. This is, in many ways, more dangerous than government suppression of free speech because at least in the U.S. the government is subject to the First Amendment, and can be voted out of office.

I revisited a similar topic, updated for the social media censorship of the Biden family influence peddling scandal, for Newsweek, Backlash Against Big Tech was a Long Time Coming. Head over there and read the whole thing.

Here is an excerpt:

But big tech, particularly Twitter and Facebook, took things a step further, deciding to ban sharing the story altogether. Twitter suspended and blocked the accounts of those who tweeted links to the New York Post exposé, even limiting the ability of the users they’d reprimanded to distribute the story via direct message. When called out for their censorship, the outlets didn’t dispute the veracity of the Post’s reporting. Instead, they said the outlet obtained the content illegally, not apologizing for censoring public discourse on an important issue but lamenting they had done a poor job explaining why they had done so….

As a free market advocate, my strong preference would have been for public pressure to convince these companies to change their behavior. Unfortunately, public pressure from the people censored—conservatives—only made these companies dig in their heels. Self-correction does not appear likely. Moreover, as these sites control more of the digital frontier, it is harder for competitors to have a shot.

The social media oligopolies appear to believe they can act with impunity. The public and now government backlash may end up destroying their business models, and they will have no one but themselves to blame.