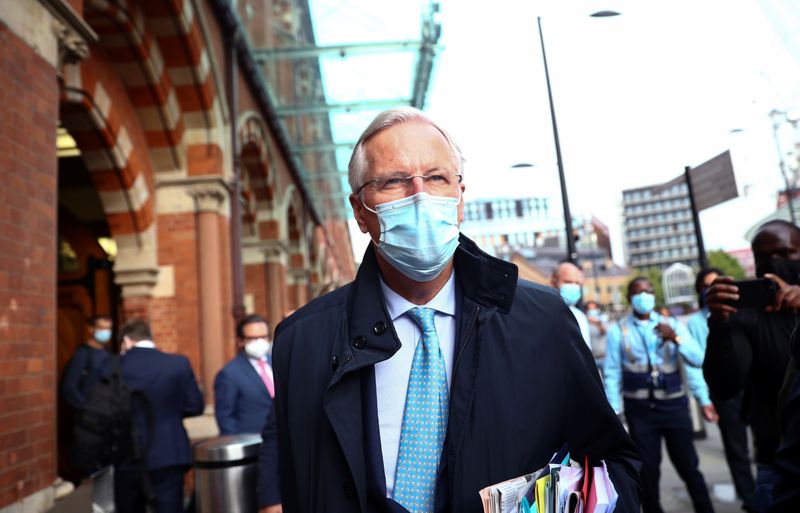 LONDON (Reuters) – EU chief negotiator Michel Barnier said on Wednesday he was determined to reach a deal with Britain, declining to comment on legislation that the British government says could breach parts of a divorce agreement signed earlier this year.

Talks on a trade deal and future relationship have made little progress since Britain left the European Union in January, and almost unravelled when London introduced the Internal Market Bill, raising fears of no agreement.

Both sides say they need to reach an deal in October, otherwise Britain will complete its departure from the EU at the start of next year with no agreement to regulate trade, or other accords on anything from security to defence.

On arrival in London before informal talks with Britain, Barnier told Reuters when asked if he was optimistic about reaching a deal: “I am determined.”

“We remain calm, respectful, realistic and firm,” he said, declining to comment on the Internal Market Bill.

Britain also says it is working hard to reach an agreement, but has stuck to its position that any deal must respect the country’s sovereignty, putting it at odds with Brussels on state aid rules and fisheries.

The EU says because of Britain’s proximity to the bloc, London must agree to a so-called level playing field of fair competition guarantees.

The two sides will hold the next round of formal talks next week in Brussels before a summit on Oct. 1-2 to assess progress and decide whether the bloc should step up no-deal preparations.

UK reopens for business By Reuters