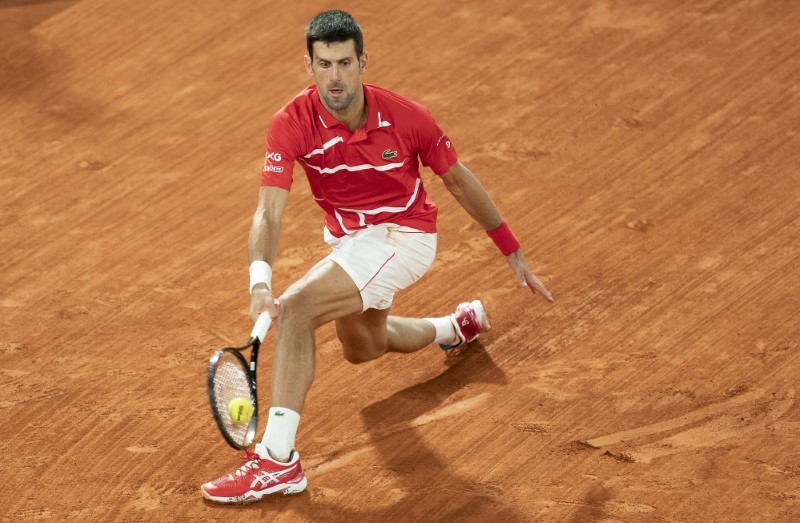 PARIS (Reuters) – Novak Djokovic has suffered more than his fair share of heartache against Rafael Nadal at the French Open but Sunday’s final offers him a chance to dethrone the claycourt king.

The 33-year-old Serb leads their extraordinary rivalry 29-26 but Nadal has won six of their seven clashes at Roland Garros, including the 2012 and 2014 finals.

Djokovic won their last encounter on the Parisian clay, however, in the 2015 quarter-finals and believes Sunday’s final offers him an opportunity to get the better of the Spaniard again even if it he says playing Nadal on clay remains the toughest challenge in tennis.

“Obviously the conditions are different than the ones that we are used to playing in May and June,” Djokovic told reporters after beating Stefanos Tsitsipas in five sets on Friday.

“I think that could be a better chance for me, obviously the ball not bouncing as high over the shoulder as he likes it usually. I mean, look, regardless of the conditions, he’s still

there, he’s Rafa, he’s in the finals, we’re playing on clay.”

Had it not been for Djokovic’s default at the U.S. Open for striking a line judge with a ball swatted away in frustration during a fourth round match against Pablo Carreno Busta, the Serbian might have been starting Sunday’s showdown with 18 Grand Slam titles, one behind Nadal and two short of Roger Federer.

Victory would see him close the gap but defeat would leave him three shy of both of them in the race for ‘greatest of all time’ status. The stakes are huge, but Djokovic says it is not the biggest match he has played in his career.

“Finals of a Grand Slam is always huge,” the world number one said. “But I don’t think it’s the biggest match that I have ever played in my life. I think there were some bigger ones.

“In terms of importance, I mean, if I have to compare, even though I don’t like, probably the first Wimbledon final that I actually played against him (in 2011). Wimbledon was always the one that I wanted to win as a kid and dreamed of winning.

“That’s probably the one that stands out. And the French Open 2016 against Andy Murray here. Every French Open final that I played was the match of my life before I actually won it.

“This is the (Grand Slam) that I won the least, so of course I am extremely motivated to try to get my hands on another one.”

Despite the fact 12-time Roland Garros champion Nadal has sailed through the draw without dropping a set and Djokovic spent four hours beating Tsitsipas in a late finish on Friday, he said he will be firing on all cylinders on Sunday.

“I’m not feeling exhausted physically so much after

tonight’s match,” he said. “It was a great battle. But I feel fine. I think a day and a half will be plenty of time for me to recover. I’m looking forward to a great battle with Rafa.”