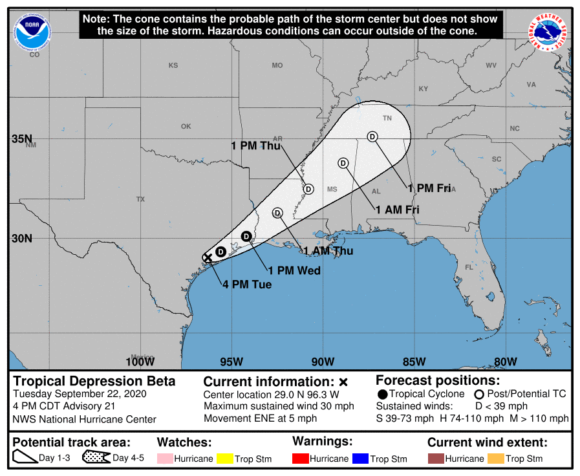 Beta weakened to a tropical depression on Sept. 22 as it crawled inland along the Texas coast south of Houston, unleashing heavy rains, flooding streets, and forcing emergency workers to rescue dozens of people.

Houston Fire Chief Samuel Pena said there had been more than 60 rescues and evacuations of people in floods caused by Beta. Most of the rescues had been from vehicles stalled out on inundated streets, Pena said.

“Stay home,” said Houston Mayor Sylvester Turner. “Just stay home. That will help you and help us. Do not try to drive through this high water.”

The port of Houston began to reopen at noon to vessel traffic with some restrictions, the U.S. Coast Guard said.

Beta was forecast to move over southeastern Texas through Wednesday, then over Louisiana and Mississippi from Wednesday night through Friday.

Forecasters warned about “significant” flash and urban flooding hitting portions of the Texas coast, where Beta was expected to dump another 5 to 10 inches (12.5 to 25 cm) of rain.

Slow-moving storms that deluge coasts are becoming a regular occurrence, a development that scientists attribute to climate change.

In 2017, Hurricane Harvey dumped several feet of rain over a period of days on the Houston area, causing major damage. Harvey was one of the most expensive hurricanes in U.S. history, costing the region $125 billion, according to federal officials.

This month marks only the second time in history that the sheer number of storms has forced meteorologists to turn to the Greek alphabet for names, having exhausted their list of names selected before the season began.

The first year that storms exceeded given names was 2005, when there were a record 27 named storms.

Beta is the third named storm in the U.S. Gulf of Mexico in less than a month, following Hurricanes Laura and Sally.

Forecasters were also tracking Hurricane Teddy in the Atlantic Ocean as it moved on a northerly path toward the Canadian province of Nova Scotia, bringing heavy rains, strong winds and destructive waves.

(Reporting by Maria Caspani in New York and Gary McWilliams in Houston. Editing by Jonathan Oatis and Timothy Gardner)

The most important insurance news,in your inbox every business day.

Get the insurance industry’s trusted newsletter